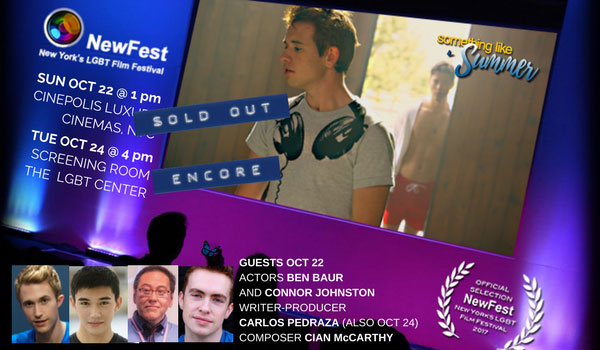 ENCORE PRESENTATION Something Like Summer sold out its New York City premiere Sunday, October 22, at 1 p.m., prompting the NewFest film festival to offer an encore presentation Tuesday, October 24, at 4 p.m.

Sunday’s screening is at the Cinépolis Luxury Cinemas in Chelsea; the encore will be at New York’s LGBT Community Center.

The festival, sponsored by New York’s LGBT film and media arts organization, runs October 19-24, presented by HBO, and programmed in partnership with Los Angeles’ Outfest, where Summer also sold out its screening in July.

“We’re thrilled to finally bring Summer to New York City,” producer Carlos Pedraza said, “and honored to be offered one of NewFest’s three encore slots so more people can see it.”

Sunday afternoon (post-brunch!) is a prime slot for NewFest, screening at the recently upgraded Cinépolis theatre in Chelsea, now one of the top-rated film venues in Manhattan. It also hosts the Tribeca Film Festival.

‘SOMETHING NEW’ Actor Ben Baur’s short film, Something New, is also screening at NewFest, the day after Summer, as part of the festival’s Boys Shorts program, Monday, October 23 at 1 p.m. at the LGBT Center Screening Room, 208 West 13th St. in New York.