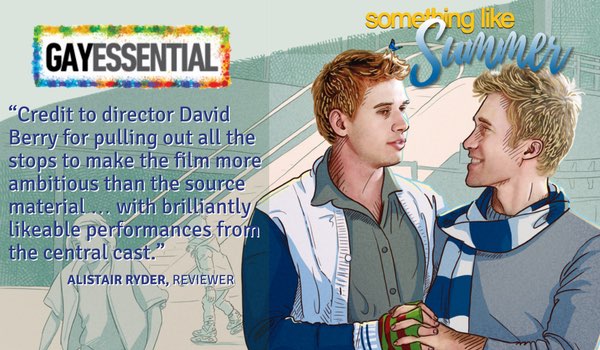 “The inaugural story in author Jay Bell’s ‘Something Like Summer’ franchise was always going to be tough to translate to the big screen,” according to reviewer Alistair Ryder, because of Bell’s intricately plotted world.

Director David Berry’s debut film is even more ambitious, Ryder writes, “transforming the story into a musical, using a mix of original and famous tracks … [to] help document the increasing years and romantic entanglements of Benjamin Bentley (Grant Davis).”

MUSIC The film’s “use of pop balladry will ensure it is granted a place in the hearts of many teenage audiences looking for a gay romance that reflects their own hormonal, confused emotions,” the review notes, while star “Grant Davis delivers stunning vocal performances throughout.”

It’s the kind of winning directorial gamble that makes me easily side with the film.

HELPING YOUTH The film fills an important niche for underserved young and gay audiences, Ryder writes, feeling “truthful to the messiness of teenage emotions, as well as portraying an optimistic future rarely seen in the majority of gay fiction.”

Watching the young characters grow over the course of the story’s dozen years — “seeing the different ways the central characters cope with their sexuality … might help younger audiences come to terms with their own feelings,” he says.

It will be an important film for many of the young people watching it.

OLDER AUDIENCES will see the “teen drama of the first half paying off in the more emotionally complex (and emotionally rewarding) second half where the cast well and truly get their time to shine,” Ryder states.

The overall effect of the movie, the reviewer concludes, is that of “a complex storyline transformed … into a genre-bending coming of age tale that will live long in the memory.”