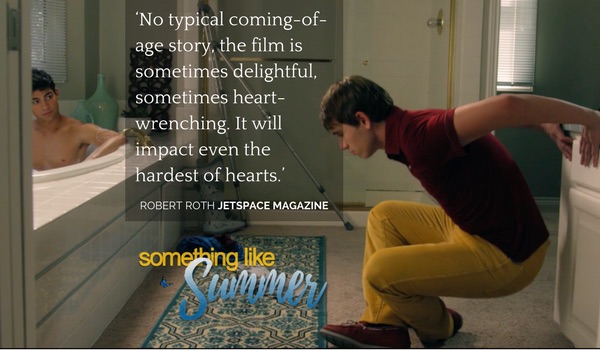 ‘UNDENIABLE’ Noting the cast’s “undeniable chemistry and strong performances,” Jetspace Magazine in Seattle weighed in on Something Like Summer, calling the film “thought-provoking and heartwarming.”

“Pedraza showed a deft hand when dealing with the characters’ highs and lows, offering nuance and complexity without victimization,” Roth observed.

‘UNDENIABLE CHEMISTRY’ “The success of the film is due in no small part to its outstanding cast,” the review notes, singling out the performance of Grant Davis playing a character, Ben Bentley, who ages from adolescence to adulthood.

It’s a challenge the young actor attacks with gusto, aided by his incredible singing voice, which we’re treated to in musical numbers throughout the film.

Tim Wyman, the boy whom Davis’ character falls in love with in high school, “is arguably the most complicated character in the story,” Roth writes, “and yet [Davi] Santos plays the part with a subtlety and natural grace that fills the character with life.”

“Both actors,” he adds, “show undeniable chemistry with one another.”

This “gorgeous, thought-provoking, heartwarming love story,” Roth sums up, “will impact even the hardest of hearts.” Not a typical coming-of-age story,” Something Like Summer is “filled with strong performances that will leave you wanting more.”