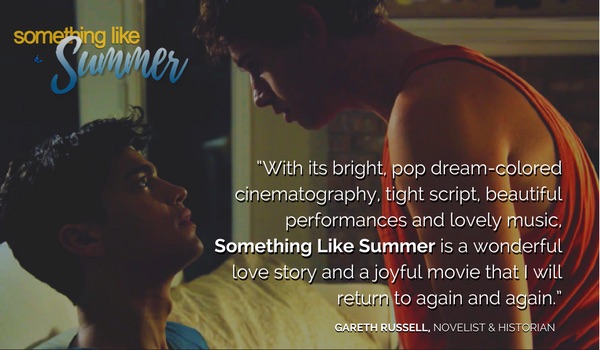 ACERBIC YET EFFERVESCENT, British historian and novelist Gareth Russell pronounced Something Like Summer “a wonderful love story and a joyful movie that I will return to again and again.”

Russell pointed to the inherent challenges in adapting Jay Bell’s novel, attempting to capture the “nuances and the twists within turns of a decade-long love affair were always going to be easier on page than screen.”

Screenwriter Carlos Pedraza made the choice to use “musical bridges to convey some of the long-term developments, while also retaining the most memorable moments from the book,” Russell wrote in a review on his website.

Read the full review on historian-novelist Gareth Russell’s website »
Originally from Belfast, Gareth Russell is a graduate of Saint Peter’s College, Oxford, where he read modern history, and received his master’s in medieval history from Queen’s University in Belfast. His first novel was published in 2011, with a second in 2012.

CASTING Russell especially notes how effectively the film was cast. “The three principals are eerily similar to their descriptions in the book,” he wrote. “Newcomer Grant Davis as Benjamin nailed the aesthetic, presence, and mannerisms of the lead.”

On the portrayal of Ben’s adult boyfriend, Russell said, “You would have to have a heart of stone not to be moved by the magnificent Ben Baur as Jace.”

Russell, who avowedly prefers the character of Tim Wyman as Ben’s boyfriend, admitted, “I’m aware Team Jace will land on me for implying elsewhere that their hero is the personality equivalent of an Advil PM, but even I have to bend the knee to Baur’s superb performance. For one brief and all-too-horrible moment, I wobbled in my entrenched views on Jace the Sky High Snoozefest — and that is a tribute to Baur’s thoughtful, elegant presence.”

Of Davi Santos’ “knockout performance” as Tim, Russell said, “it looks effortless and that’s no small task, given that many of Tim’s actions are, to put it mildly, questionable. … There’s a moment where Tim’s hand reaches up to Benjamin’s shoulder; between them, it is worth more than a monologue.”

And of Ajiona Alexus’ performance as Allison, Russell noted, “Alexus, who has appeared in Empire and as Sheri Holland in the Netflix hit 13 Reasons Why, captures all of Allison’s ferocious intelligence and tenacious loyalty.”

Russell summed up the movie’s appeal: “With its bright, pop dream-colored cinematography, tight script, beautiful performances and lovely music, Something Like Summer is a wonderful love story and a joyful movie that I will return to again and again.”