‘Summer’ Ranks No. 4 on Must-See List of Latin Films at NewFest 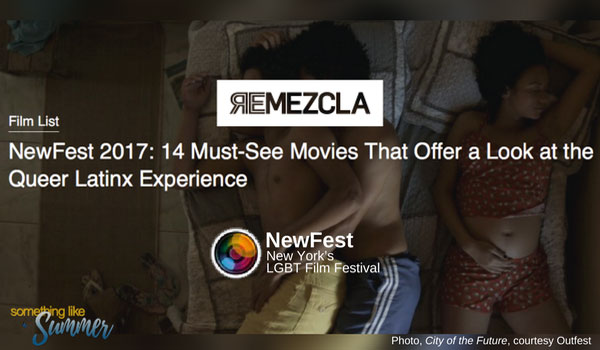 NEW YORK — The Latino digital magazine Remezcla named Something Like Summer fourth on its list of NewFest‘s “14 must-see movies that offer a look at the queer Latinx experience.”

Remezcla (Spanish for “remix”) is considered the most influential media brand for Latino Millennials with a national and international audience in the US, Latin America and Spain. It operates as a digital publisher, creative agency and entertainment company.

Describing NewFest as an annual event that “brings together the best and brightest in LGBT media,” Remezcla writer Manuel Betancourt chose the best films created by Latin American and Spanish artists from among NewFest’s 40 features (including more than 20 from first-time filmmakers), 97 shorts and eight web series — a total of 145 films.

MAKING THE LIST Something Like Summer ranked No. 4 out of Betancourt’s 14 selections, noting the performance of Brazilian-born star Davi Santos, and the screenplay adaptation by Colombian-born producer Carlos Pedraza.

Betancourt’s list included the New York City premiere of the controversial Cuban drama Santa y Andrés, and two films featuring Wilson Cruz (Star Trek: Discovery, My So-Called Life). The list is a roundup of Remezcla’s “Top Latino picks to help you choose what you should catch.”