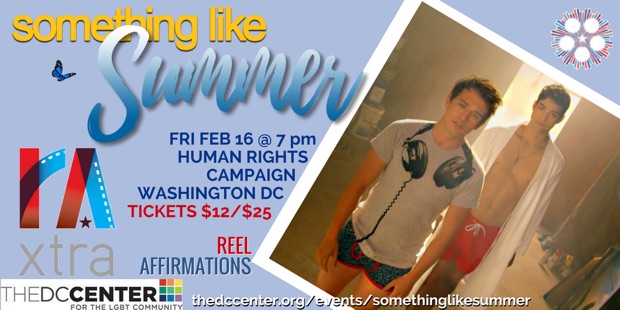 NATION’S CAPITAL The D.C. Center for the LGBT Community, plans to show Something Like Summer in Washington, D.C., on Friday, February 16, as part of its Reel Affirmations XTRA monthly screenings of LGBTQ films.

“I’m really excited to have Summer screen in Washington, where I lived for years, and that fans on the East Coast get another chance to see the film,” said writer-producer Carlos Pedraza.

Star Ben Baur is tentatively scheduled to appear at the screening, scheduled at 7 p.m. at the Human Rights Campaign, also one of the sponsors of the showing.

The D.C. Center’s monthly film series, Reel Affirmations XTRA, keeps LGBTQ images and lifestories in the forefront of the arts and culture scene in the nation’s capital.

The screening is scheduled to be hosted by Rayceen Pendarvis of The Ask Rayceen Show. The Center also sponsors Washington’s annual Reel Affirmations Film Festival.